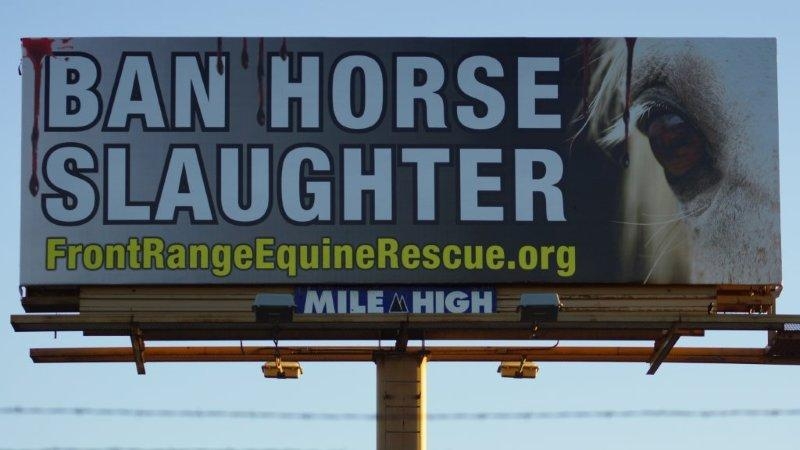 Horse slaughter is the shame of the entire horse industry.

There is no excuse for approximately one-percent of the U.S. horse population to be killed for human consumption overseas each year. America’s horses are not raised as a food animal; they consume products and medications during their lives which contain banned substances for food animals. Their meat is at least dangerous, if not, toxic for human consumption.

America’s wild horses should never be part of the slaughter pipeline if the 1971 Wild Free Roaming Horses and Burros Act were enforced properly.

Transport to slaughter has little to no enforcement of poor regulations. The road to slaughter for horses is cruel and inhumane with numerous injuries, illness, and even death occurring. The brutality begins long before a horse reaches the kill box. Regulated plants in Canada and Mexico have guidelines which would be similar to those imposed by USDA if horse slaughter plants opened in the U.S. Former U.S. plants had numerous violations, no different than those found at regulated plants across the borders. A small population of slaughter bound horses end up at unregulated plants in Mexico; the treatment and killing is barbaric via a puntilla knife.

Federal legislation is long overdue to end this gruesome industry both within the U.S. and outside its borders.

Economically, horse slaughter costs millions of dollars annually when considering the expenses involved with horse ownership over the course of a horse’s life multiplied by the number of horses slaughtered each year. When a horse is slaughtered, income is lost to a hay/feed provider, veterinary practice, farrier, boarding stable or privately owned facility, supplies for horse care and use such as tack, grooming items, feeders/water tubs, not to mention barns, pasture turn outs, shelters, arenas, round pens, and to other services such as training, showing, truck/trailer, association dues or fees and so on. Even a debilitated horse (which should never be sent to slaughter) deserves the dignity of humane euthanasia and appropriate disposal. Again, expenses to someone in the horse industry for those services are lost to a foreign-owned slaughter house.

Studies have shown just over 92% of horses going to slaughter are in good condition.

If 99% of America’s horses are not shipping to slaughter, they are being kept elsewhere. Most horses today are used for pleasure, sport/competition, work horses on ranches/farms, and as companions. America’s wild horses should never be part of the slaughter pipeline if the 1971 Wild Free Roaming Horses and Burros Act were enforced properly. It is to the benefit of the horse industry as a whole to implement alternatives to slaughter for the one-percent killed annually. While horse rescues/sanctuaries play an important role, they are not the primary outlet for at-risk horses. Studies have shown just over 92% of horses going to slaughter are in “good condition”; the average age of the horses killed is 3 to 7 years. Incentives to stop irresponsible and over-breeding are needed.

By no means does the above cover everything to know and resolve with the complex issue of horse slaughter. What is clear is that it has no place in America’s history any longer.